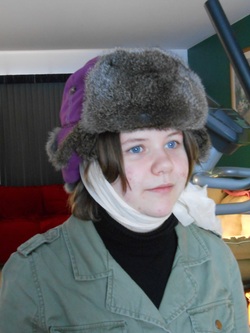 I’ll be the first to admit that I’m not an expert in art. I often make works that I dislike in the end, but it’s the growth that I’ve experienced that’s the most important. Throughout my experience, I’ve learned what mediums I’m good with and I always seem to do better when I’m nervous about a piece. When I’m unsure or have concerns about how to do something, once I get it down I can make some really interesting and unique things. I’ve always had a passion for art, yet I was always afraid to make my own things because I feared failure. This is something that I’ve gotten over through trying new things. That’s really what I feel my art is about. While in some cases I’ve used the same medium twice, I often do something new, sometimes even something that most wouldn’t think of trying. I have also gained the skill of critical thinking in my work. Sometimes I make things just to make them because I like to experiment, but sometimes there can be a much deeper meaning to my work. My personal art is heavily influenced by illustrators but I have moved away from that in my studio art, being more influenced by artists like Jackson Pollock and Paul Klee. Realism is not my forte, yet through doing self portraits, it is something I have greatly improved in. As I mentioned, I’ve used a variety of mediums, my favorites being the weird ones, like glue and nail polish. I’ve also learned that I am good with colored pencils. Overall, I feel like my goals in art are to improve and while so far I have improved greatly, there is still a long way for me to go and I don’t think I’ll ever stop improving.